Our Dedication to Future Generations! The Whale is HERE!

If those of you following the blog haven’t noticed, there are two voices.  Calley writes the blogs addressing biodiversity and ecology; Julia writes the ones following the building of The Rama Exhibition.  Obviously, we both get busy building the exhibit, and forget to write about it from time to time.  There are just so many hours in a day, and they seem to fly by as we joyfully work on the many projects afoot.  So it is that the whale got finished and sent off to Paul McCormick to be digitally captured (he takes about 200 digital captures to create the template for the laser printed giclee)  before I ever saw it, and I have waited and waited for my first viewing of the finished product.  So, here it is, at long, long last. 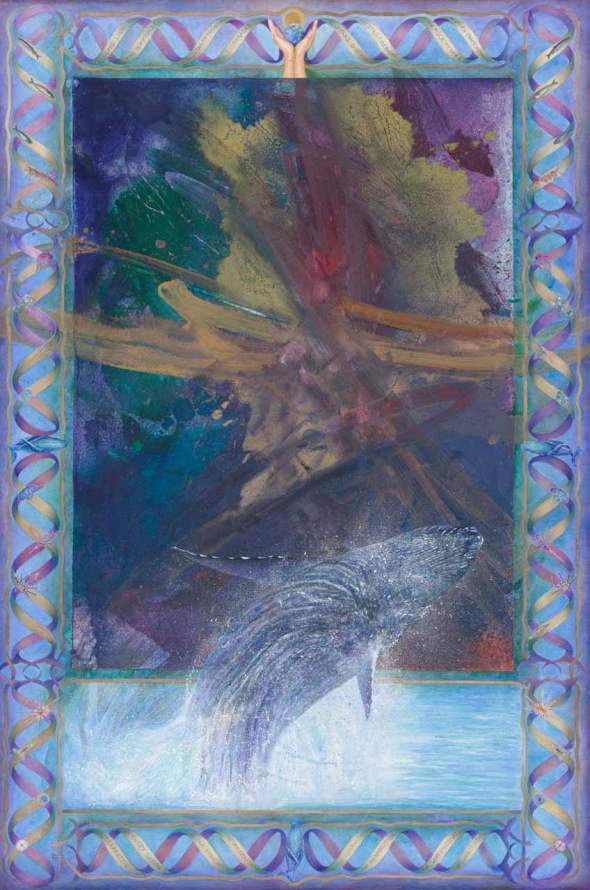 There are so many fun stories to tell about this painting.  Researching reference shots, and finding the photographer, Dale Walsh, I called him at what turned out to be late evening in his east-coast home.  His humility and willingness to share, and his excitement to be asked was heart-warming.  Here it is, Dale!  Thank you so much!

Noa, Calley’s awesome son posed for the whale-tail holding the Earth at the top of the painting.  I was there, and it wasn’t an easy pose to hold or capture.  Thanks, Noa!

Following the ribbons on the border, keeping their orientation straight, color and shadow-wise was a trick.  It actually tricked Calley a time or two, and she had to correct them.

Rama played a major role in the composition of this painting, and much of it surprised Calley as she painted.  For instance, while the volcano in the background was obvious from the beginning, the mirrored whale-image over the whale suddenly became apparent one day.  I’m not even sure that Calley was the first to notice.

The whale inserted into the border, bottom and sides, was a photo taken by Randy Johnson, a local practitioner of acupuncture who hikes and dives all over the Big Island on his days off.  He caught this awesome photo (and many more) on a once-in-a-lifetime encounter with whales who came to him while snorkeling.  Thanks, Randy!

The border took a very long time, given its complexity, and the fact that there is poetry lettered into the strands of the ribbons.  Here’s what it says:  “Long live the humpback, lion-tailed macaques and silver-backs, wild-yaks, sand flax, crested firebacks, the Rock Hyrax and Western Diamond Backs.”

And on the bottom, “A declaration in every nation of our dedication to future generations to conservation and restoration and to imagination and innovation.”

Calley is now well into the endangered flowers of Hawaii.  I took more pictures on the 19th day of work, and will post them soon.

18 Sep This entry was published on September 18, 2013 at 7:11 am and is filed under Building The Rama Exhibition. Bookmark the permalink. Follow any comments here with the RSS feed for this post.