A FIERCE GREEN FIRE:       THE BATTLE FOR A LIVING PLANET

See this movie!  The first major motion picture documenting the history of the environmental movement, A FIERCE GREEN FIRE is dense, intense, educational and a wake-up call.  It has the capacity to awaken, as I am sure is its intent, your fierce green fire, and has the potential to stir the flames of fierce green fires around the world.

A smash hit at the Sundance Film Festival, the chronicle was directed by Mark Kitchell and narrated by Meryl Streep, Robert Redford, Ashley Judd, Van Jones and Isabel Allende.  After he sold his Oscar-nominated 1990 film, Berkeley in the Sixties, he spent several years researching the environmental movement.

In a recent interview just before Earth Day, 2013, the San Francisco Chronicle asked Kitchell: Where do you think the environmental movement is going?

A: Real big picture, I think we’re in a 100- to 200-year transition of our industrial society toward civilization that’s in sustainable balance with nature. And I think that means reinventing the way we do a lot of things, and a lot of it has to do with energy, of course. It’s not just energy. It’s not just climate change. We have not yet figured out how to have a human society that’s sustainable. I see a lot of pieces of it coming. I feel it is a very promising thing. 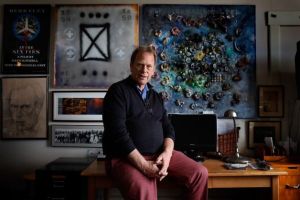 Kitchell is currently working to create a green museum and resource learning center about climate change, global sustainability, and the local northern California the redwood forests, rivers and ecosystems.

What profound commitment to the Earth, the whales, the water, the land, the soil!  The movie starts with the Sierra Club and spotlights John Muir and David Brower saving the wild places and quickly chronicles the movement toward a global movement of all races, all ages, all countries in a profound struggle to clean up the messes of unconscious industrial waste and save their lands, rivers, forests and wildlife.

It is heartening, disturbing, depressing, inspiring and important.  Please journey around the living planet and the love struggling to protect it.  Highly recommended.

01 May This entry was published on May 1, 2013 at 6:23 pm and is filed under Uncategorized. Bookmark the permalink. Follow any comments here with the RSS feed for this post.